Escape to the Isle of Wight

Your perfect summer holiday by the sea

As featured in Coast Magazine, Mail on Sunday,

Bonchurch, renowned for its timeless small village charm is built on a series of terraces on the lower slopes of St Boniface Down. Set on a former strawberry farm with sunshine and sea air aplenty. Since 2006 OceanBlue Coastal Retreats have specialised in presenting unique coastal cottages for your perfect Isle of Wight holiday.

Follow the lane through the woods, besides the old strawberry field and roll down towards the sea. 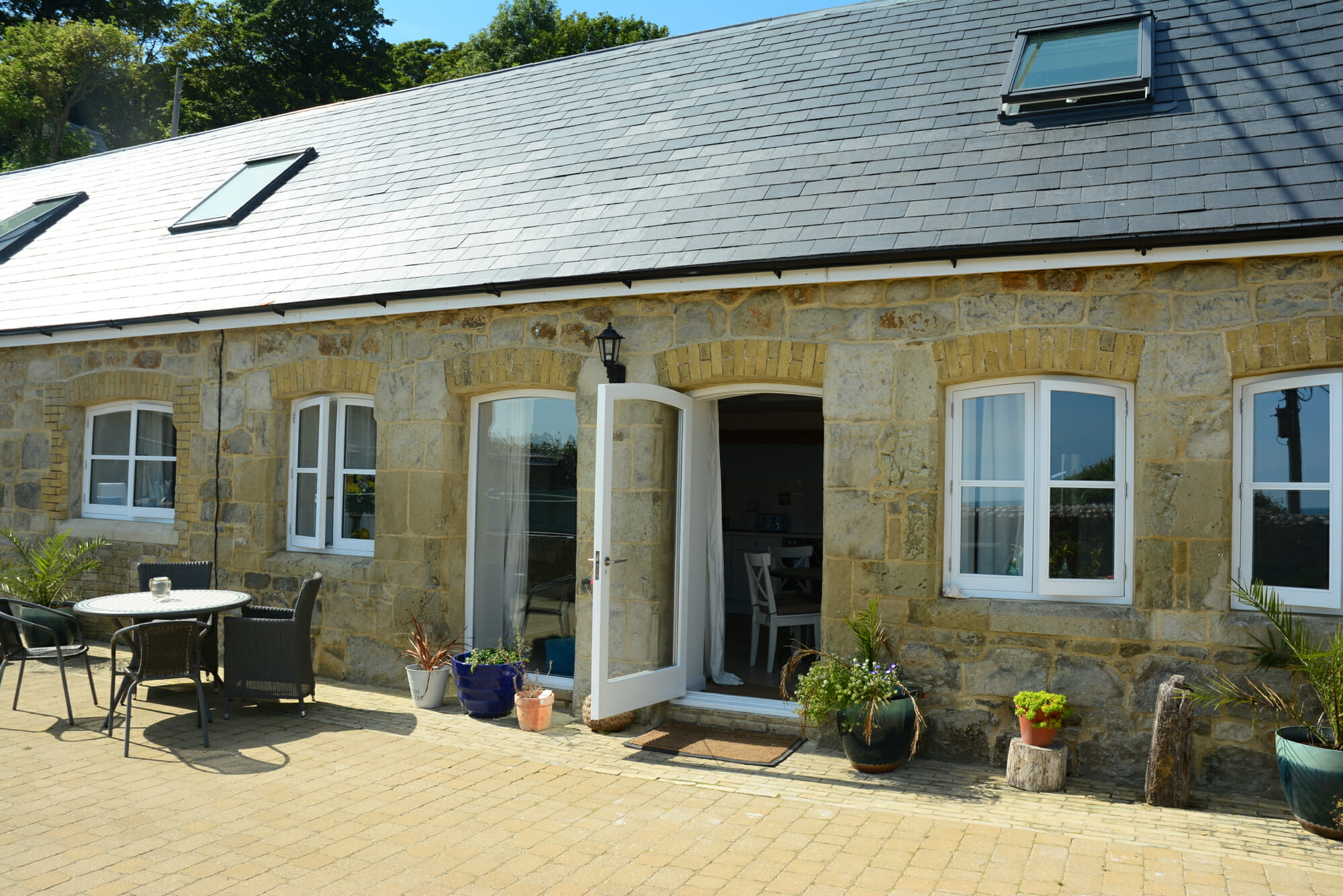 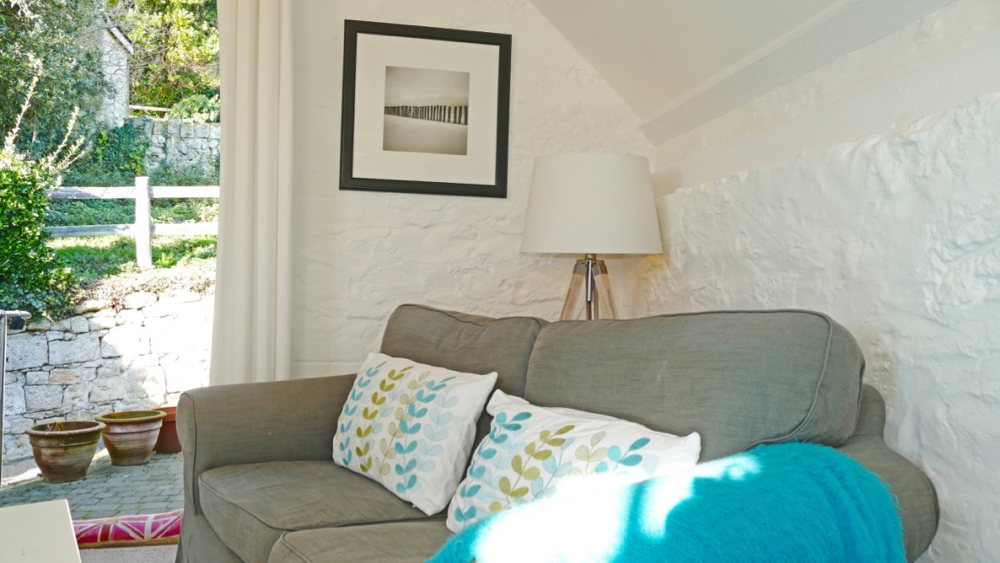 Cute whilst contemporary, 'The Hideaway' is a lovingly restored holiday cottage set between leafy slopes and coastal contours. 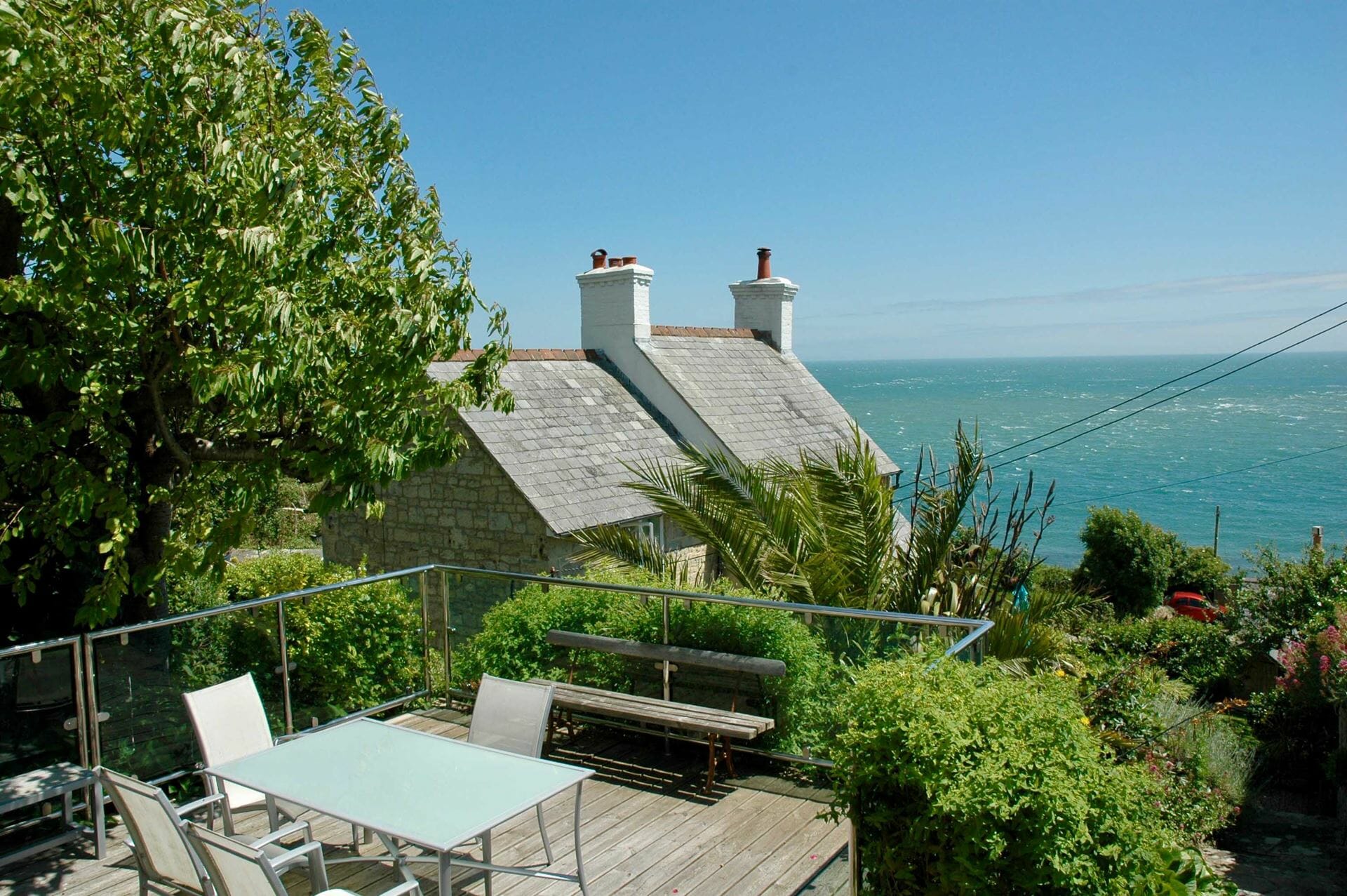 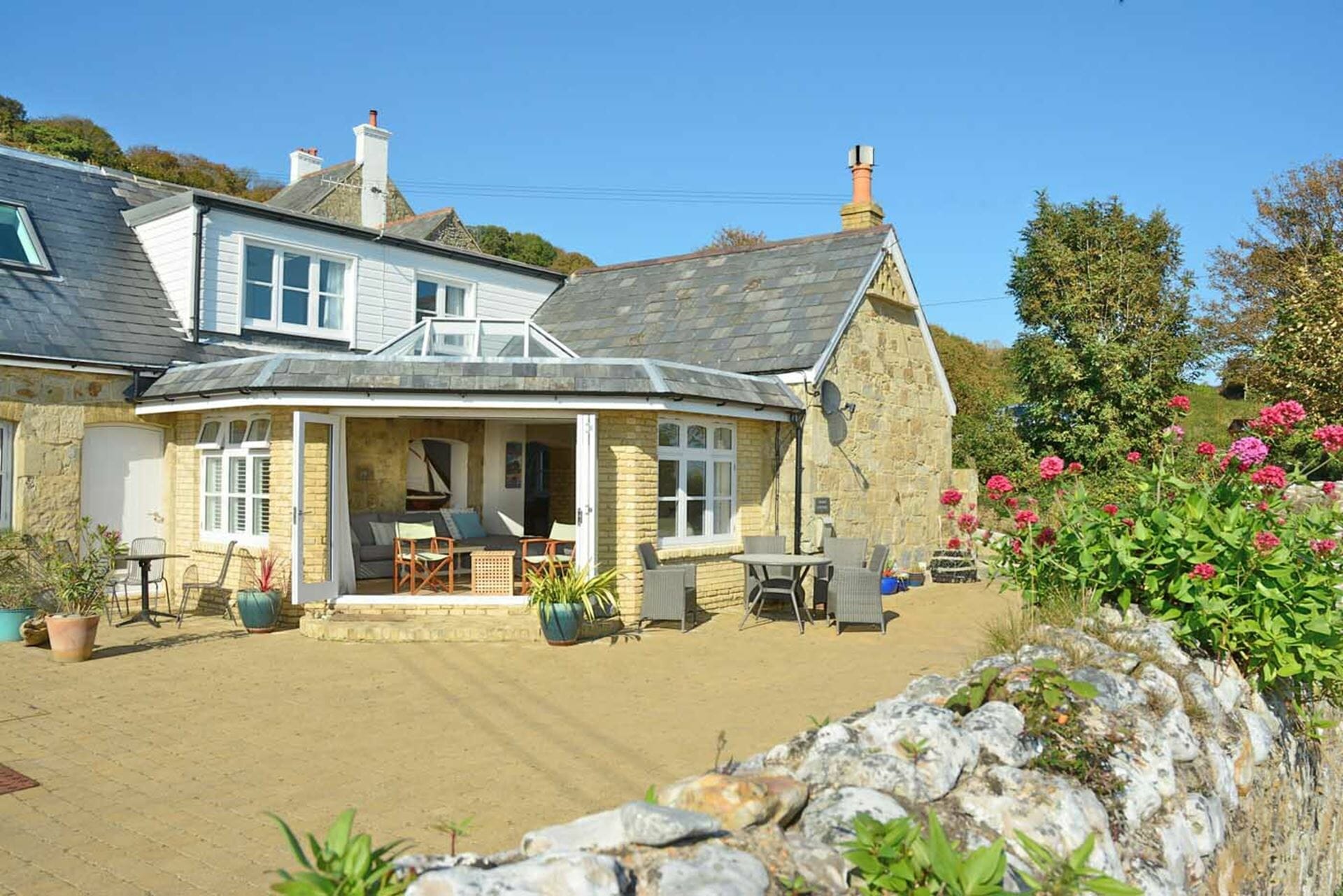 Beautifully restored cottages in a stunning coast meets country setting.
Our cottages are set down a private lane on the south coast of the Isle of Wight. The Undercliff is an Area of Outstanding Natural Beauty and is famous for its unique microclimate, offering year round temperatures milder than anywhere else in the UK.

Follow the path down the cliff to Monks Bay, a beautiful sheltered sandy beach, safe for bathing. The offshore breakwater to the west is the perfect place to cast a fishing line out to sea. At low tide hundreds of rock-pools are exposed, home to many small fish, prawns and crabs. When the tide comes in float over the rocks with a mask and snorkel – you will be amazed at what you see.

Explore the wooded area to the east of Carmel known as The Landslip. As with the rest of the Undercliff, the Landslip has been sculpted over the last 10’000 years by erosion and landslides giving rise to a distinctive landscape onto itself. The unique coastal path will lead you from rugged cliff top through enchanting woodland and open glades with views far out to sea. Climb the steps cut into the cliffs known as ‘The Devils Chimney’ where smugglers stashed their hauls from wrecked ships hundreds of years ago. 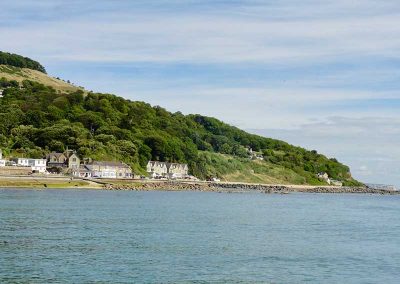 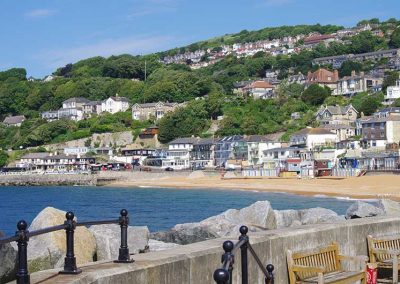 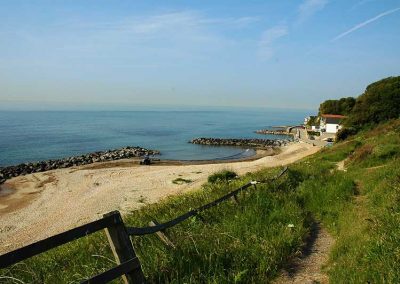 Built on a series of terraces on the lower slopes of St Boniface Down, the timeless village of Bonchurch is recognized as much for its natural beauty as it is for its historical connections.

Beginning at the foreshore the village is fronted by Monks Bay and Horseshoe Bay. The wide beach at Monks Bay provides a safe bathing area for children and exposes an abundance of fabulous rock pools to explore at low tide. Further to the west, Horseshoe Bay marks the start of the sea wall which runs through to Ventnor with a seasonal ice cream shop and café about half way.

Climbing from the front towards the village you will pass St Boniface Old Church. Rebuilt in 1070AD, the church was once visited by Charles I who attended a funeral here during his imprisonment on the Island at Carisbrooke Castle.
The heart of the village is the Pond, home to an abundance of wildlife including ducks and moorhens. Huge carp rise to the surface for scraps of bread thrown by visitors. You may even see a herring waiting patiently for is catch in the shallows.
Across the road is The Pond Café – a fabulous bistro style restaurant. Walking on up the Shute, you will pass the New Church dating back to 1780. Following the road round is the Bonchurch Inn. The Pub serves an excellent Italian Menu as well as many traditional favourites and a good selection of Real Ales.The top of the Shute leads to Upper Bonchurch with many footpaths leading to the Downs behind and the Landslip to the East. The view from Upper Bonchurch is spectacular, overlooking Lower Bonchurch and The English Channel. If you’re feeling energetic, climb St Boniface Downs, to the most elevated position on the Isle of Wight. At 830ft the entire island is at your feet with unbroken views of farmland and woodland across The Solent to the Mainland.

Similar to Bonchurch, Ventnor was built on the sheltered slopes of St Boniface Down and takes full advantage of the Gulf Stream. The town grew up in the Victorian era, after the island was made popular for summer holidays by Queen Victoria. At this time many beautiful Victorian mansions were built on the terraces taking full advantage of the seaviews looking far out over the channel. In recent years many of the Victorian houses have been restored to their former splendor. The town now hosts a number of growing music and food events.
Ventnor Harbour, opened in 2003 offers a fair-weather Haven for small sailing boats and powerboats travelling round the back of the island. It is also the base for a community of fishing boats catching and selling seafood into Ventnor Pubs and Restaurants year round. Swimming on Ventnor Beach is safe and Lifeguards are currently appointed. The bay is a typical bucket and spade type destination with plenty of pubs, cafes and restaurants selling a good variety of food.
Further along the coastal footpath to the west is Steephill Cove, a popular sheltered bay, with numerous cafes and restaurants again selling seafood. Not to be missed is one of Mandy’s homemade crab pasties, made freshly with crab caught from the cove.
The Botanic Gardens is further up the cliff. Due to the mild climate of The Undercliff many Mediterranean and even tropical plants thrive here. The walk along the cliff top through the St Lawrence Undercliff is one of one of the best walks on the Isle of Wight. Heading towards the Island’s most southerly point the rugged cliff tops give way to countless secluded coves and bays. Looking back towards Ventnor it is also the best place to see the natural terracing of the Undercliff. Ventnor nick named ‘Curio Capital of the Isle of Wight’ has all the usual general amenity stores. More interesting, however are the speciality shops, selling rare books, antiques, unusual craft, furniture and general bric-a-brac. The unusual landscapes of the Undercliff attract many artists and photographers giving rise to some exceptional artwork.

How to find us

Please book this house!!! It’s a truly amazing place! If you’re looking for a relaxing, quiet, beautiful, beach house then this is the place for you. Everything described by Lucy and more. Will definitely be booking again xx

What a lovely little cottage

What a lovely little cottage, so cosy and warm with brilliant views. We were so lucky with the October weather that we only lit the log fire once. The sunrise was amazing to see each morning. We didn’t want for anything, just perfect. A 2 minute walk down to the beach as well where we had a paddle and lovely walks into Ventnor one way and Shanklin the other way

This cottage is fabulous. It was clean and well maintained and nothing was too much trouble for the owner and her team. The views were stunning and we enjoyed our week. It was very child friendly and our little grandson was able to crawl around in safety which made the week even more relaxing. The coastal path was brilliant and the walk to Ventnor super where crab was widely available much to our joy! A lovely week exploring the island.

Best place we have ever stayed in. Waking up to the stunning views. Strawberries itself was perfect we couldn’t fault it. The little bay was perfect for the children to go to in the mornings before we headed out for the day. Lucy's mum is lovely. When we saw her she always asked if everything was ok. We will be back that is for certain. Even the children want to go back.

This was our fourth time at the Hideaway and still as beautiful ever. Very clean cottage with everything you would need. Situated in a stunning spot with the beach right on your doorstep. Excellent walks to shanklin and ventnor were you can find great places to eat. Can't wait to be back again

We stayed for five nights recently and had a wonderful winter break. The cottage is warm, well equipped and so close to lovely walks.(which my sausage dogs appreciated!). Would love to come back again in the summer months to enjoy the terrace and garden. Many thanks, Penny x